A casino game is more exciting when it is a slot because the possibilities of winning are unlimited and one such online slots game is Turning Totems with 5 reels and 11 fixed paylines. The reels are tall standing sacred Mayan tradition totems with three symbols on each reel that resembles face masks of humans, beasts, animals and birds. The game is set in the backdrop of a barren desert surrounded by cacti and rocks. There is a cool native American music playing in the background along with some sounds effects during the gameplay. The slot allows you to bet between £0.10 and £200 with different denominations.

About the developer of Turning Totems:

This wonderful theme based online slots game was developed by Thunderkick, a renowned brand name in the gambling community that has produced several feature-rich games. With advanced gaming technology, you can experience unique features and gameplay variations in all their slots.

This online slots game has some interesting Mayan style face symbols of the tiger, a man, a woman, beast, rooster and a vulture in sleeping mode. The tiger symbol is the highest valued that pays 10 times your total bet amount and in two-way when five of it appears on a payline. Appearance on multiple rows and reels simultaneously can result in big wins. There are two bonus symbols represented by a snake and an awakened vulture with eyes wide open. 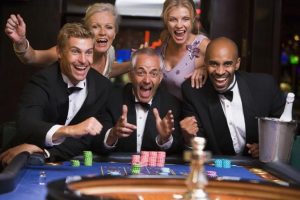 Sleeping Wild: The base symbol of sleeping vulture is also the wild symbol of this online slots game but gets triggered only when the thunder reel feature is activated. The wild covers for all the other symbols of the game except the snake symbol which a bonus feature.

Thunder Snake: This symbol appears and changes the entire reel into a thunder reel and activated wilds on that reel. It also gives you a free spins and during the free spin, the reel remains in the thunder mode.

Bonus Game: Three or more thunder snake symbols activates the bonus level. The scene changes from day to rainy night and you will be given 5 free spins. Any reel that changes to thunder mode will remain that way until the end of all five spins, giving you a better opportunity for those big wins.

Summary: Online slots game like this one is meant for beginners as well as high stake players because of various bet amounts to suit all types of budget. The game offers 96.10% as the return to the player.